Balls are a great choice as Bull Terrier toys. 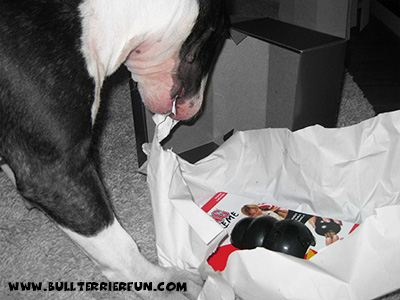 As for my experience with EBT’s, just an example – the following situation with Mila:
Bully arrives at dog park, beach or any other place where different dogs are around. Bully can choose between playing with ball or other dogs – If lucky the other dogs get a quick “Hello” from Mila, who then sinks into her own world with the ball, ignoring everything around her from that moment on.
Fancy would also play with her ball for hours, the thing had to go everywhere with her – even potty! And I know of other examples from other EBT-owners and have seen Bullies in animal shelters, who would have given everything for a ball.

But which ball should you choose? 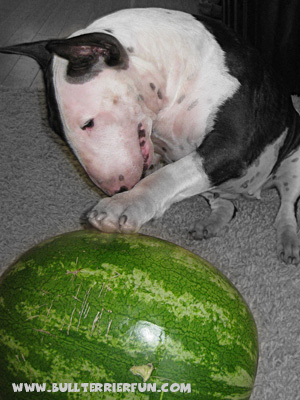 THAT’S a BALL! Mila thinks big and even tries to play with melons.

In general, with dog, and especially with strong, yet sensitive digs, such as the Bull Terrier, money should never be the only criteria. Neither when it comes to nutrition, nor harnesses or collars, sleep wear, transport … and toys.

Because very soon you will otherwise learn the truth behind the words: “Buy cheap – and you will pay double!”
Toys for Bull terriers have to withstand certain powers. And there is hardly any dog toy existing you can really leave your Bull Terrier unsupervised with forever and not have it destroyed sooner or later.

When it comes to toys for Bull Terriers it is a good idea to take a look at quality, not price, read reviews, compare – AND accept that some of it is just trial and error. Because there’s no such thing as THE IDEAL TOY for EVERY Bull Terrier.

Aside from their sometimes destructive power all dogs have different preferences. But one thing is pretty sure: Almost all of them at least love SOME kind of ball. But some like the bigger ones, some like it small, that depends.

In general a ball for a Bull Terrier should neither be too small nor too weak. Be careful with soft plastics, especially when they are hollow!

On the other hand, hard, non-yielding plastic is also not a wise choice (there is a range of toys on the market made of that material, which I do not consider safe for ANY dog). The problem is, that stronger dogs can shatter these toys and chances are they will eat the pieces just out of curiosity. Inside their esophagus and stomach these pieces can behave like broken glass. I think, it is clear what that means.

As a rule of thumb I would not let a dog play unattended with any ball she can completely carry in her mouth. Supervision plays a very big role in the question, which balls you can give to your dog.

Some dogs also accept bigger balls, the size of a football or even bigger the size of a basketball. Mila does not like that kind of balls. Therefore only smaller balls come into question for my own tests. The balls below are all balls, I have tested with Mila.

Read on about my recommendations on balls for Bull Terrier toys here: