For several different reasons some owners may not want their female dogs to get spayed. For the owner of such an “intact” female some knowledge about the heat cycle is helpful to prevent “accidents”. In this post you will find information on the heat cycle in dogs, signs to look out for and measures to take. 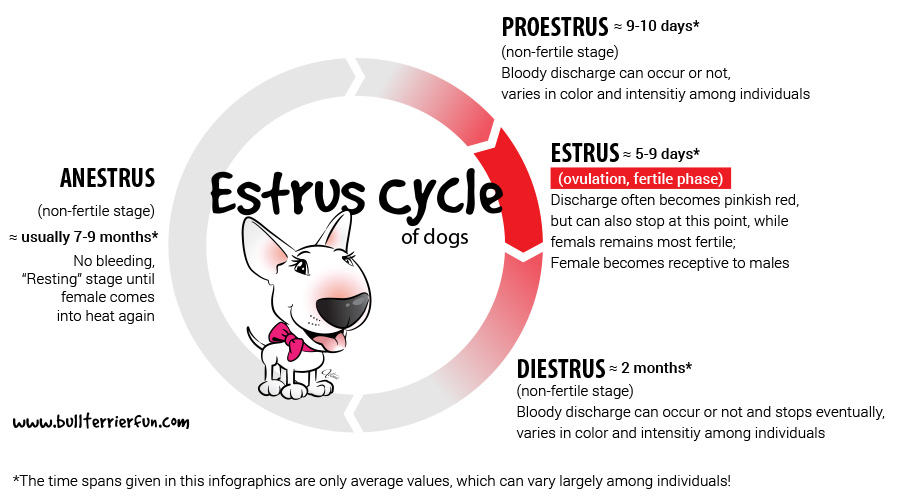 First and foremost it is important to note, that dogs are very different and that there is NO rule of thumb valid for EVERY dog, when it comes to heat cycles, especially regarding length and signs.
As pet owners our best bet is to rely on our personal perception of our dogs and changes in their moods or bodies – rather than just looking for discharge etc.

Steve Gogulski, breeder and owner of www.bulliesofnc.com assisted me with answering some interesting questions to be found in this essay, offering more detailed insight into the heat cycle in dogs from a professional perspective.

BTF: “Steve, one of the most common questions owners have is probably “How often will my female come into heat?”. Are there any statistic numbers?”

Steve Gogulski: “The problem with answering this question is the fact that no two females are the same and heat cycles can change depending on age, whether they are being bred, other females they are around which come into heat, health, activity level, etc.”

The main and important period of a heat cycle in dogs lasts about three weeks. During this time the dog undergoes three different stages, followed by a fourth “resting” stage:

Proestrus is a non-fertile stage. Bleeding may or may not occur depending on the individual dog. Some dogs experience almost “silent’ heats, while others do bleed a lot. The proestrus usually lasts about nine days* (but that can vary!).
This stage is marked by an increase in the female’s estrogen level (can only be accurately determined by testing). The dog is not receptive to males yet, but from now forward she will more or less obviously show many of the signs of heat. Possible signs are moody days, swollen teats and/ or vulva and/or having to “go” more often. Females in heat naturally understand that marking their scent during urination in several areas outside will attract males that will easily and instinctively pick up the scent of a female in heat thus the desire for them to use the bathroom outside more often.
In many dogs it is hard to rely on the occurrence of bloody discharges alone, as they may differ a lot!
But every owner who knows their dog’s behavior quite well will notice other mentioned changes (explained in more detail below).

Another significant sign are males becoming more interested in your female.
If you notice males becoming interested or your female is showing the signs of entering her heat , you should avoid all contact (not only mounting, but also the dogs’ rears touching etc.) between your female dog and males. The reason is that mounting is not mandatory to introduce semen in the right places and that semen can survive for about a week under the right circumstances. If your female catches semen while non-fertile, but then becomes fertile while the semen is still alive, chances are she could still become impregnated. Females have become pregnant while being completely separated in a kennel run from males. Even with a kennel or chain link fence separating a male and female, conception can occur. This is often when you hear about an owner explaining that they think a neighbor’s dog jumped over their fence and bred to their female which resulted in pregnancy. Rarely those are owners aware of the fact that leaving their female to roam free in their fenced in yard has probably attracted every intact male on the block, which are said to have the ability to pick up the scent of a female in heat for up 3 miles and may have resulted in a pregnancy through the fence.

Read on about Phase 2, the Estrus, on the next page.