Today I have a question for you, guys:

Have you noticed that your dog sucks on blankets or other soft objects and do you know why he/ she does that?

I had planned on writing an essay about this after researching possible causes. The problem is, I could not manage to find conclusive information on the internet and not even after talking to other dog owners. 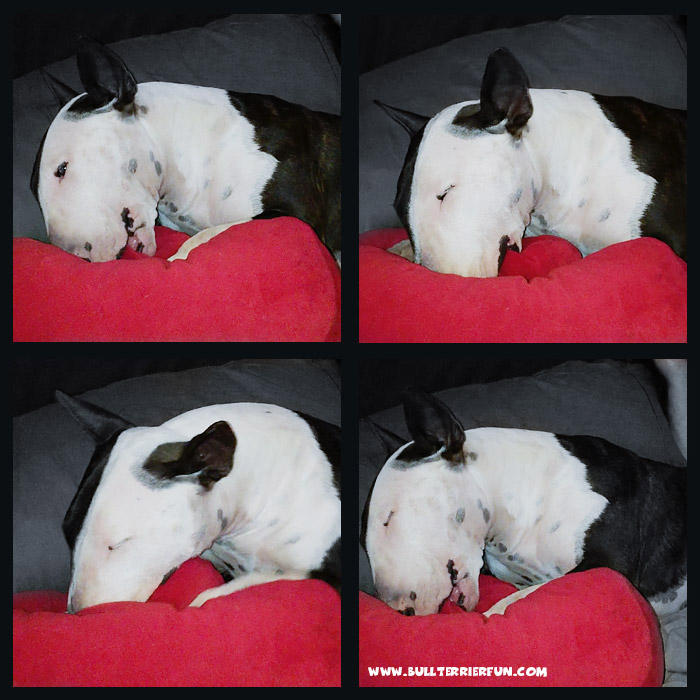 Mila suckling on a pillow

Obviously a number of owners have witnessed that their dog sucks on blankets or other soft objects, such as pillows or soft toys no matter what breed.

I am occasionally watching Mila sucking preferably on our stuff like certain fluffy or furry pillows, but also on some of her soft toys. Mostly in the evening shortly before bed time.
She does it with tender devotion in times when she is obviously feeling very comfortable and relaxed. It looks utterly cute, how she massages the object with her paws just like cats use to do it combined with her baby-like suckling.
The other day I also shot a video of it:

If a dog sucks on blankets it seems to have one thing in common with other dogs doing the same thing:

It seems to calm them and make them sleepy. Sometimes Mila actually falls asleep over the action.

With many behaviors that look funny or cute there can be more “under the hood”. That much I know.
Just the other day I saw a “funny” video of a rabbit being bathed on the interent. The rabbit was stiff like statue and I thought by myself:
“That’s indeed looking funny, but despite not knowing a lot about rabbits this one to me appears like it is under extreme stress and the pose seems to be more like pretending to be dead because of deadly fear.”
In a closeup one could see the poor thing shaking. The unlucky owner who had posted this video for fun had to take some verbal beating from several viewers, whose comments confirmed my guess. I think he or she just did not know better.

Anyway, as I am nosy by nature I read and research. But this time the result was disappointing.
All information I was able to dig up was indicating that suckling on soft objects by a dog – regardless of age – is supposed to be the result of some kind of trauma, such as neglect or being separated too early from the mother. Also some people think this is something especially shy and reserved dogs do.

Well, Mila is happy and healthy since always, anything but shy and she has never experienced any kind of trauma. I also have some doubts that I am looking at mother separation issues here.

So, if anyone knows more about this cute phenomenon, knows why else dogs are doing it and likes to provide his knowledge for my post, please just contact me and let me know. I’ll be glad to provide your information here for future readers. OR just comment on this post.

UPDATE:
I have just received VERY valuable input, which came in as a comment. But I do not want it to just sit in the comments section because this stuff is probably so interesting for MANY that I decided to include this particular comment directly in my essay. Please feel free to also share your thoughts on it. I myself will maybe comment on it at a later point. Right now I m still thinking, researching and wrapping my head around the information.

Thank you, Troy, for taking the time to share this information with us:

Hi Dorothea, I believe I have the answer to your question…I have a Pomeranian who suckles on soft toys while rhythmically kneading the toy with his paws as if he was kneading a ball of dough. He continues this bizarre ritual for up to an hour until he falls asleep with the toy still in his mouth. It seems to soothe him so I’ve never made any attempts to prevent the behaviour. However in an attempt to better understand it my initial search online only revealed similar information to yours, but it turns out I has looked at it completely from the wrong angle… Today I finally had a breakthrough when I came across an article about OCD in dogs. The correct terminology is: Canine Compulsive Disorder (CCD) and it turns out that one of its listed symptoms is: suckling on soft toys or blankets. The following article confirms that:

Scientists have identified genes involved in Obsessive Compulsive Disorder (OCD) in dogs. The results, published in the journal Genome Biology, identify four genes strongly linked with canine OCD, and suggests that using dogs as a simplified model of the human condition might open up new avenues for research into the more complex human OCD.

OCD affects 1-3% of humans, but in dogs, particular breeds are more susceptible than others. Similarly to human OCD, the dog version of the condition involves repeating normal behaviours. While typically in humans, these might be hand washing or cleaning, checking or hoarding, canine symptoms include repeated grooming, constantly chasing their own tails or shadows and SUCKLING or BLANKET SUCKING”

Another article on the topic states that:

“Acral lick was the first canine OCD to be documented but was certainly not the last! The concept of canine OCDs has now expanded to include compulsive tail chasing, flank sucking/BLANKET SUCKING, light/shadow chasing, snapping at “imaginary flies”, running in geometric patterns, and many more repetitive behavior conditions.

Susceptibility to canine OCD arises from genetic influences but chronic anxiety – sometimes as a result of thwarted biological agendas – appears to be instrumental in allowing the genie out of the bottle. A cycle of OCD can be thought of as anxiety leading to a recurring thought of how to address it (the obsession), compulsion leading to temporary relief, but then building anxiety causes the cycle to repeat itself. ”

One of the interesting bits of information I found on the topic is that ““Dogs most prone to develop compulsive behavior problems are frequently high-strung and impulsive. Highly motivated and high-strung dogs who are intolerant of conflict and frustration seem to be particularly at risk for developing compulsive habits.” It would stand to reason that dog breeds whose propensity for intense motivation has been enhanced by selective breeding –”
The same article contains:

“A Menu of Obsessive Compulsive Canine Behaviors:
…Flank sucking or object sucking: Dog sucks on his own flank or on toys, blankets, or other objects.”
and
“Breeds Predisposed to OCDs:
Here are some of the dog breeds that are known to have genetic predispositions to specific OCDs:

70 thoughts on “Have you noticed that your dog sucks on blankets or other soft objects?”