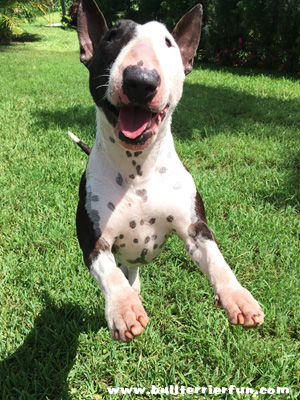 Does your Bull Terrier keep popping up like a “Jack in the box”? Are you green and blue with “bruises of joy” from your dog?
All of those, who already owned a Bull Terrier in the past probably know about this issue.

It is a pretty natural behavior of this breed. Many English Bull Terriers are very high-energy and active dogs and need proper outlets for this energy. Poorly exercised Bull Terriers can easily develop destructive and self-destructive, obsessive behavioral disorders.

Many NEW owners are pretty much caught by surprise when their English Bull Terrier keeps jumping at them and going up a lot – often accompanied by constant nipping. Luckily this behavior can be corrected.

But let’s take a quick glance at the causes first.

Jumping is not limited to English Bull Terriers, but it is very common among them and if not corrected can become pretty extreme and even lead to injury, loss of teeth and similar unfortunate events.

Why is jumping such a huge problem – especially with Bull Terriers?

“Unruly” behaviors are often interpreted as “stubbornness” or “disobedience” in dogs.
But in many cases they are not intended as such by the dog. Often the reason for disobedience is a lack of functioning communication – the dog simply does NOT understand what the owner does and doesn’t want  – and a pool of misunderstandings – the dog interprets the owners actions differently than intended.

This obviously can lead to a variety of problems.

Bull Terriers – already when they are puppies – are “high energy” and in addition pretty muscular and strong dogs. They are often a lot heavier than other dogs that are the same size, because they are so compact and packed with muscle.

At the same time they have an incredible ability to jump and run. It often seems like they virtually have springs in their feet, when they jump straight up even without the need of gathering momentum first.

In general many Bull Terriers are pretty rough players, partly due to their strength and weight which they are not aware of. This is why other dogs (different breeds) do not really like the very particular way English Bull Terriers usually play and tease.

English Bull Terriers also are “people dogs” – meaning that most of them LOVE to engage and interact with humans, the goofier the better.

And of course they are applying their rough habits also to humans –  without any negative intentions, just because that’s the way they naturally act also among each other. They need to LEARN how to behave differently.

Learn more about how dogs can learn to show the desired behavior on the next page.

3 thoughts on “Help! My English Bull Terrier keeps jumping at me and hurting me!”