I always remove the squeaker, before I give those balls to Mila. The squeaker is easy to locate an remove. It takes hardly any effort to just press it out of the ball. As I don’t want my dog to swallow or inhale it, I take it out.
With the squeaker in the ball also sucks in water when Mila squeezes it in the pool. Once filled it does not release the water easily and at a certain point it will sink.
The material of the ball feels kind of vulnerable, yet proved surprisingly resistible to Bull Terrier teeth. For us one ball could last 5- 15 days. That is with daily play for about 1-2 hours and a lot of squeezing.

Once the ball tears, it looses bounce, but it still is able to recover to its original shape. It is still possible to play with it. But the tears lure the urge of the dog to tug and pull and destroy the ball eventually. As the ball tends to tear, it will most likely come apart in pieces afterwards, which bears the risk of choking or ingestion of those pieces.

The Toys “r” us spiky ball for dogs is not available online for all I know, but it can be purchased in stores. There is also a football-shaped version available.

The Toys “r” us Spiky ball for dogs from PetSmart was the first alternative I found before the next ball I will introduce to you in this essay.
The low price made it a reasonable choice even though the balls sometimes only lasted about a week. But it was not the perfect solution. I was still on the look for something else. 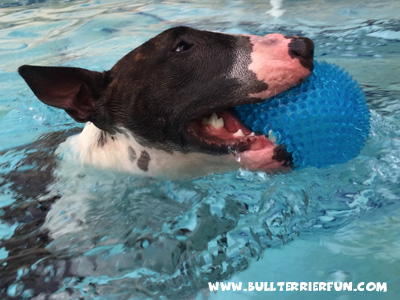 Although we use the 4.5 inch size for Mila – which could be considered pretty large for a 45 lb Bull Terrier – she is very happy with it and can even safely grab it in the water.

After I had read some pretty promising reviews on Amazon about the ball and also noticed that the squeaker would be part of the ball, I came to the conclusion that this ball may actually be a piece the manufacturer had put some consideration into and decided to give it a try. I bought it for her as an early birthday present. She is using it for catching and fetching, as well as excessively retrieving it by swimming in the pool.

The ball floats in the water and has a good bounce (even on grass due to the spikes and the size). Because of the size I have ordered on purpose (4.5 inch) I was a little nervous at first. On the one hand I wanted to try a bigger ball than 3.5 inches, hoping that this will make it harder for her to chew on the ball. On the other hand I was a little afraid that she might refuse the ball due to its size.

But Mila is able to catch it when flying, she can hold it in her mouth, because she can squeeze it and she can grab it in the water. Great!
The spikes allow her to grab it, although she cannot even think about taking it into her mouth in whole – it’s too big for that.

The squeaker cannot be removed, even for the dog it will be a hard thing to do, if not impossible (we’ll see about that), because it is built in the ball itself. It’s not a single piece.
The noise is not too loud – but it is still a squeaker and WILL make noise.

One thought on “Gnawsome ball – the awesome spiky ball for dogs”