The rubber material of the ball feels pretty thick. I cannot squeeze it very much with my hands. Mila does better with her mouth. One of the first things I have noticed is the seam where the two halves of the ball are connected. Usually a weak spot in almost every ball that is constructed of two halves, this does not seem to be an issue so far. The seem looks very durable and is hardly noticeable.

We are now into four days of intense play – 2-3 hours a day – on the porch in the pool, squeezing, fetching, nudging. It has lost one or the other spike already. Other than that no visible signs of use.
So far I am pretty impressed by this product and willing to believe that it has the potential of even lasting for months even with a strong jawed dog, just as some of the reviews are stating.
I would still not let my dog play with it completely unsupervised. And although it seems to be a tough ball, I discourage excessive chewing of my dog. 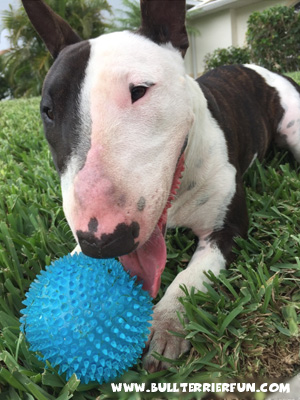 This ball is a little more expensive than many other balls I have tested. But again this case seems like spending a little more can pay off. I cannot say enough good things about this spiky ball for dogs.
It is actually the best ball for Mila I have ever encountered until today due to durability and acceptance by Mila. It is rare that I post reviews so soon after having a new item put to the test. But this time everything looks really promising and I am really impressed. I will keep you posted on the longevity of this ball.

I have not found the spiky ball for dogs in stores yet, but you can order the Gnawsome, for example, from Amazon: 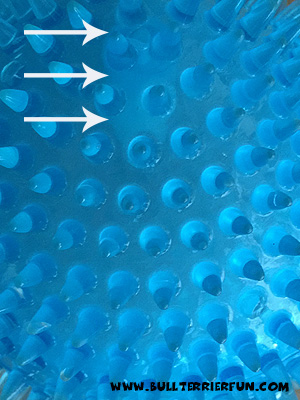 Gnawsome still holding up after 10 days of use. A little hard to recognize: The arrows are indicating where the squeaker is located inside the ball.

We’re now into 10 days of intense daily play, squeezing and gnawing. The Gnawsome still looks pretty good. No tooth marks yet! This ball has held up in such great shape longer than any other spiky ball we have tested so far. The squeaker is dead since today, but it’s still safely attached inside the ball. Also a few of the spikes are gone. But even if Mila would swallow those, I don’t expect neither the spikes nor the squeaker to be trouble. A great toy so far!

The Gnawsome has now spent over four weeks in our household – played on a daily basis sometimes for hours. That makes about 60 hours of bouncing, nudging, gnawing and squeezing and tearing.

It has not lost many of its spikes. The tips have started to yellow a little.
I had noticed a small tear about two weeks ago. First I thought this might be it. Now the ball has a weak spot. But so far the tear has not opened more. The ball is still in great “playable” shape, still floats and bounces well!

I am pretty positive  that we will own this ball even for a little longer. It’s another toy, Mila needed a “manual” for, meaning I had to interfere a few times in the beginning when the ball was really new to prevent her her from destroying it and I am supervising her play (at least take an occasional look). This ball will probably not survive aggressive chewing for long, but it can withstand quite some gnawing and squeezing and tearing. 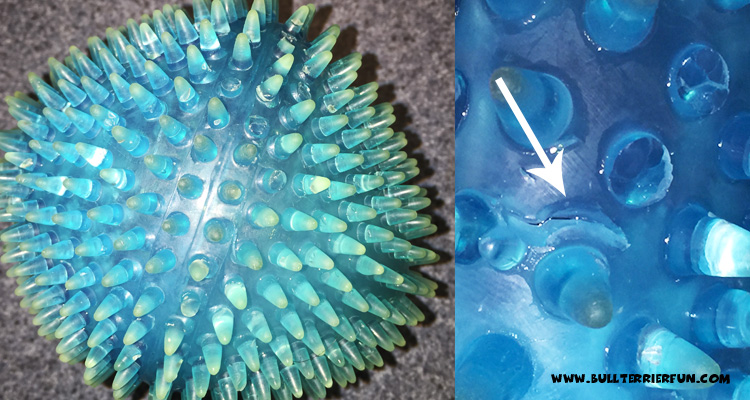 The Gnawsome spiky ball after about four weeks of play. One tiny tear and a few lost spikes – that’s it.

It’s still her favorite toy and she is looking forward to playtime every day. Once this ball is gone, I will definitely buy it again. Hope they will not stop producing these, because for now I am feeling that we have found the perfect ball for Mila.
A great ball! Recommended, if you let your dog play supervised!

A lady in this Bull Terrier forum just told me that her dogs managed to tear this ball within two minutes! Finding the right toys is hard and obviously highly depending on your dog’s personal preferences during play! I don;t know in detail how thing went in this case. But in general especially with dogs, who mainly find their fun in taking things apart, sadly this ball will probably not be the one to stand up against. The Gnawsome is definitely NO CHEW TOY!

One thought on “Gnawsome ball – the awesome spiky ball for dogs”