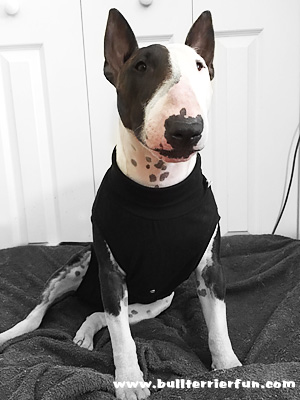 Originally invented for dogs after surgery, this suit also aids in treatment of skin conditions, covers wounds for better healing, aids light incontinence problems and is great for dogs in heat.
People often use doggie diapers during a dog’s heat cycle. I have been using one in the past for Mila either.
However, you probably know the following challenges: The diapers getting fixed around her hips, do not only cause Mila discomfort. She obviously just does not like the feeling of the diaper around her hips. As a result of her trying to get rid of that thing by rubbing against walls, curtains and chairs, not only is the house always a mess during this time. The diaper also becomes leaky every now and then, leaving spot on the floors and the couch.
END_OF_DOCUMENT_TOKEN_TO_BE_REPLACED