In general when selecting a Bull Terrier toy, always consider the enormous strength of their jaws and their bias to chewing. They will very likely not only push the ball around, but also chew on it, especially if they have access to it over long periods of time.

This is why tennis balls for dogs are a choice to think about twice. 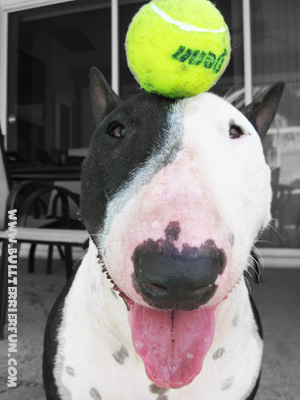 Many just give their dogs the usual tennis ball that is normally used on the court.
A general pro of real tennis balls is, that hey have a pretty good bounce (even “dead” balls) are light and they float.
With 2.5 inch in diameter tennis balls have the ideal size to be carried around in a Bull Terrier snout. This is probably why many dogs love them.
The problem:
Tennis balls – especially the more resistant ones made for professional court use – usually have a felt cover that is designed to wear off slowly even under heavy duty. The used materials for this felt cover can have abrasive effects on a dog’s teeth when chewed. This is not only true for Bull Terriers, but for any dog prone to chewing on tennis balls. Also there can be unhealthy chemicals contained in the felt cover of the ball that do not benefit your dog.
Opinions about the true extend of these potential hazards differ among experts.
Some vets do not consider the abrasive effect of the felt covering harmful enough to cause severe damage over a dog’s life and consider the use of tennis balls for fetch – not chewing – okay, if supervised. Others say that the content of chemicals is usually overrated.
I have also heard stories of dogs who in the heat of play have inhaled a lot of the yellow loose fiber of the covering felt material and subsequently suffered from pulmonary problems. Maybe dogs who tend to go completely overboard during play and hyperventilate should rather NOT play with tennis balls at all.

Another disadvantage lies in the advantages themselves:
A these balls are not too big and easily compressible for a dog with strong jaws like a Bull Terrier, the risk of swallowing them is particularly high when the dog is playing with the ball unsupervised or accidental swallowing it in panic, when the owner tries to take away the beloved ball.
Years ago I actually heard of a case in which a Bull Terrier had swallowed an entire tennis ball without the owners even noticing. When he started loosing his appetite and feeling worse and worse the owners took him to the vet for a thorough check-up. The next day he was scheduled for an x-ray screening and the vet was already anticipating the necessity of surgery. Luckily that same night the Bull Terrier started to gag and vomit and finally managed to regurgitate the tennis ball. He was one lucky dog!

I have used real tennis balls for water games. Sometimes they hold up fairly well for some days, sometimes half an hour of play is enough to render them unusable.

Formerly my advice was to better buy tennis balls for dogs in the pet store rather than use real tennis balls. The balls from the pet store are manufactured with a less abrasive felt covering (at least they SHOULD be) and don’t contain harmful chemicals (at least they SHOULD NOT).
Sadly, on the other hand the durability of some tennis balls especially made for dogs I have tested was very low and there are other hazards involved. I will not even mention the no-name brand from the pets market I have tested, because these are not advisable whatsoever. I took Mila 2 minutes to damage them.
So the next problem – choking hazard or swallowing small pieces – was waiting right around the corner.

Read on about the pros and cons of real tennis balls for dogs on the next page.