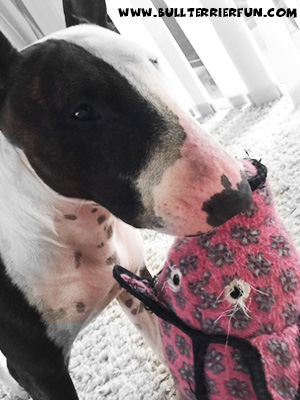 Mila with her Tuffy dog toy “Polly” the Pig

For Bull Terrier owners who like to give soft toys to their dogs, “Tuffy Toys” may be a viable choice.
They are currently the only soft toys I buy for Mila, because of their durability. Don’t get me wrong! I am NOT stating that they are indestructible or that your dog should play completely unsupervised with them.
All I say is that these toy may be a great choice for people looking for something made of fabric and “kind of soft” but at the same time able to resist a Bull Terrier’s nipping and tearing.

Mila has already owned several ones of the Tuffy toys: The sheep, the piggy and the tug o’ war toy. 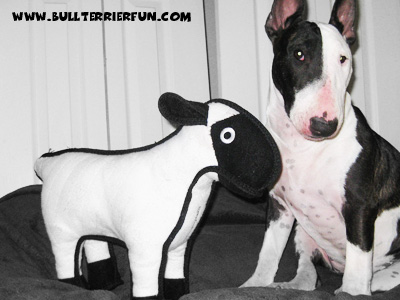 Mila and her Tuffy dog toy “Sherman” the sheep

I found the Tuffy Toys on Amazon. But I think the original manufacturer is vipproducts.

The Tuffy Toys are all pretty firm and good quality – like the heading says: soft dog toys that last 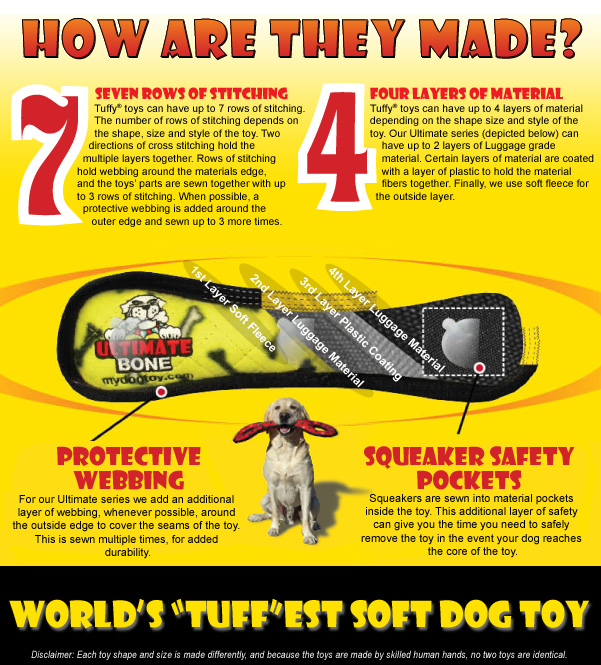 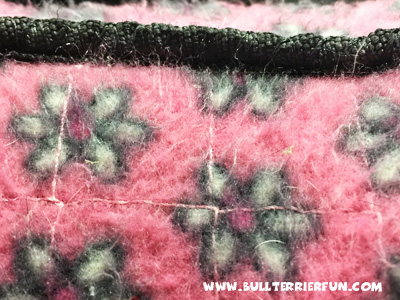 Material Close-Up: The picture shows how the layers of the outer fabric are attached to each other by stitching, making it hard to separate them. The outer layer is some kind of soft fleece. Also you see the black ribbon made of very durable material and attached by real thorough stitching.

I am always a little skeptical about sticking out details, such as labels, tails, ears or thick seams, because they often are a favored trigger for chewing.
But I have to say, these toys are holding up pretty well despite the thick seams, as these are so durable.
Some toys, such as the tug toy come with squeakers. The animals don’t. At least not the ones Mila owns.

If your soft toys don’t last – as long as you hope for, sewing them MAY be an option

I do not give any guarantees here, just describe how I handle the matter:
I sew and repair Mila’s toys several times before discarding them by strong and flat stitching. That helps to make the toys live longer. But it is important that the visit at the “plush pet clinic” does not result in very thick and raised “scars”, because those would work as even more interesting triggers for chewing!