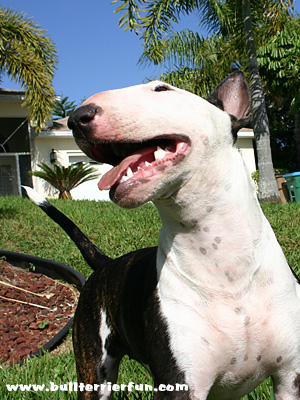 Many people, especially the ones, whose dogs have pink noses like many Bull Terriers do, are asking themselves: Can dogs get sunburn?

The answer: Yes, dogs can get sunburn (and even skin cancer)!

So, how can we determine, If our dog has a sunburn?

Basically the same way we do it as humans: Press one finger on the skin, release and watch how quickly the skin returns from light color to pink or reddish color. The faster the change and the darker the red, the more sunburned is the skin.

Note: Dogs with pink noses, such as Bull Terriers, also tend to get red noses from elevated blood circulation especially in warmer environments, for example when they are active or very excited.
If the red disappears quickly once the dog is back inside and calming down, the suspected sunburn may as well turn out to be the typical Bull Terrier “red excitement nose”.

However, it is always wise to be cautious.

If you suspect a sun burn, you can use natural Aloe Gel to soothe the skin in the affected area.

Note: Usually only very large amounts of Aloe are toxic to dogs. To be safe, I would still not recommend to use Aloe, if your dog tends to lick and reaches the area with Aloe on it. The saponins in this ingredient can cause several symptoms depending on the amount ingested, including vomiting and diarrhea.
In that case you can rub on a small amount of virgin coconut oil instead to soothe the skin.

To prevent sunburn, humans use external products, such as lotions, cremes, gels and sprays.
This unfortunately is not a good idea for dogs in many cases, because of harmful ingredients in formulas for human kids or adults for one reason. And even most products formulated especially for dogs (or pets) are critical in one or the other aspect, which is why I cannot list ANY products I would recommend here.

Funny, but true: The best sunburn protection in dogs is to FEED the right stuff

Fish oil works as a natural sun screen “from inside”, if fed regularly. Also you can rub the nose with Coconut oil before and during sunbathing (and even after). Coconut oil is supposed to have an SPF of about 4. Not much, but both Coconut oil and fish oil are sufficient for my sun hungry girl to avoid sun burns.
And if the Coconut oil gets licked off, it’s only a healthy treat and not a health threat. 🙂

One thought on “Can dogs get sunburn or is my Bull Terrier too cool for that?”