The only reason why I still spend time on testing them is because Mila loves them more than any other ball. But I am afraid some day I might end up trying to get her used to other balls, just to get rid of the tennis ball topic.

Recently I gave the KONG Squeaker Tennis Balls a try. 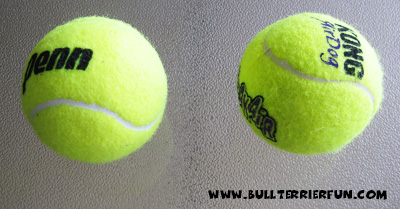 The KONG Squeaker Tennis Ball is pretty much the same size as a real tennis ball.

My balls look a little bit different than the ones I found on Amazon. I bought mine at Target. But I guess they are the same, just maybe different generations. Not quite sure.

Although they really look like regular tennis balls, these balls are actually made especially for dogs.
First, let me say, that I don’t want to completely turn these balls down. They are about the same size as a real tennis ball and they have the same signal color. The inner part is not constructed of two halves – like real tennis balls are – as far as I can judge it. They more seem like one hollow piece. This is an important difference to real tennis balls, because the ball will not just “split” from chewing. On the one hand that makes them a little more durable.

BUT – and I cannot stress this enough – there are special risks involved with these balls!

Read on about the risks of alternative choices of tennis balls for dogs on the next page: The KONG Squeaker Tennis Ball
So, for example the construction of these balls at the same time enhances the risk of them to get swallowed in whole, especially because these balls are much more compressible than real tennis balls.

I actually got hurt a litte bit once I tried to take the ball away from Mila, because she clinched her jaws around it and it compressed so much that my fingers got stuck in the middle.
Eventually after three consecutive days of play also this ball surrendered to Mila and the inner plastic part kind of tore open rendering it unusable.

Read on about the pros and cons of the KONG Squeaker Tennis Ball for dogs on the next page.