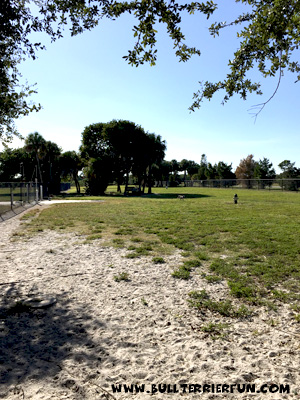 The beaches are beautiful and clean, white sand and some piers (however, dog’s are not allowed on the piers). From the dog beach – and the adjacent beaches you can enjoy a beautiful view over to the Skyway bridge and into the Tampa Bay. The entry fee of $5 for cars visiting the park is already included in the daily rate for the campsite.
The two fenced dog parks on-site, one for smaller dogs, one for the bigger dogs, are both huge!
The beach area permitted for dogs is also pretty wide and provides ample space for unleashed ball throwing and running.

Due to the weather this time of the year is just perfect for a tent trip. Low chances of rain, not too hot, not too cold. The sea already felt a little chilly – nothing for a wimp like me. But Mila loved to take swim!

You are also allowed to take the dog on leash to the historical Fort De Soto preserve, which is just a jump away from the beaches and worth a visit! It’s a nice walk through a piece of Florida’s history with some relicts, wall charts and structural remains to see.

I also noticed a tiny museum there, but we skipped that because of the dog.

The smile of “knowing it better”

We pretty much spend the entire first day on trying to wear Mila out. Playing in the dog park and at the beach. She even developed some interest in one or the other dog. Which was great, because usually she is far more interested in toys and especially balls and basically ignoring other dogs.

So, we really enjoyed watching her have fun with other dogs, even though balls were around.

On the second day she seemed to be a little sore and her paws obviously hurt from running, which of course did not prevent her from TRYING to run after balls and play again. It was a funny view, because there was not much left of her powerful and graceful leaping. It had turned into choppy tip tapping, like she was wearing heels.

Yet, it also took half of the second day until she showed the first signs of really giving herself up to exhaustion.

There is a nice small German restaurant in Tierra Verde, the Black Forrest Cottage – approximately 10 minutes by car from the campsite – that allows pets on their porch.

We went there with Mila on the second day. I want her to get more used to being among lots of people and also being quiet around us when sitting outside in a restaurant, so we get more chances to take her with us.

We live in pretty rural surroundings, so it is not as easy for us as just stepping outside the door and throwing her right into the action.

I was a little tense, because Mila likes to “sing” when she likes things a lot and also when she is excited and nervous. I was also afraid she might not want to settle down. But all my doubts were resolved and we had a really good time there and a tasty early dinner.

Read on about our visit at the Black Forrest Cottage restaurant on the next page.